Speak Up For Pedestrian, Cycling, Transit Improvements in NYC! | Mobilizing the Region 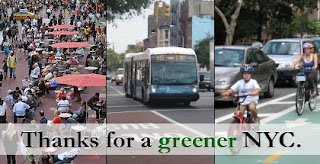 Speak Up For Pedestrian, Cycling, Transit Improvements in NYC! | Mobilizing the Region: "Three-plus years of pedestrian, cycling, and transit improvements in New York City have come under fire from some local media and politicians in recent weeks.

The data repeatedly shows that the kinds of green transportation projects rolled out by NYCDOT have made the city safer. But as Streetsblog documents, the NY Post‘s editorial board and columnists have been attacking complete streets redesigns."
at 9:46 PM No comments:

Egyptian Protests Extend to Streets of New York - NYTimes.com: "“I was 14 years old when he took office,” said Khaled Dawoud, 43, a journalist from the Upper East Side. “We deserve better.”

Mr. Dawoud said that he was filled with nationalistic pride by the sight of people taking to the streets of Cairo and said the fact that large numbers of ordinary citizens were defying Mr. Mubarak’s curfew was a victory in itself.

“We defeated an oppressive police machine,” he said, identifying himself rhetorically with the protesters. “We were not afraid of the bullets.”"
at 12:33 AM No comments:

NYC Coalition for Transit Justice – Page 1: "We are NYC mass transit riders and workers who believe that everyone has the right to safe, reliable, accessible, & affordable public transportation."
at 6:55 PM No comments:

Full Speed Ahead on Deepwater Drilling - NYTimes.com: "The ink is barely dry on the White House commission’s investigative report into the Deepwater Horizon accident in the Gulf of Mexico pointing to industrywide deficiencies, but signs are emerging every day that deepwater drilling is expanding around the world."
at 8:08 PM No comments: