Skift: "The subway system served an average of 5.4 million riders on a typical weekday in 2013. This was the highest volume served since 1950. The Metropolitan Transportation Authority (MTA) has used some form of rider measurement since at least 1946.

In fact, subway ridership has been on the rise for several years. Annual ridership reached a 62-year high in 2012 with 1.654 billion trips." 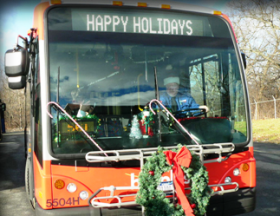 Credit CDTA
Ticket To Ride: Albany Keen On Public Transit | WAMC: "According to the study, 76 percent of Americans are open to taking public transportation instead of driving, up from 69 percent in 2010.

Albany 10th ward Council Member Leah Golby says alternatives make sense as the population continues to grow. "The writing is on the wall and we need to plan our cities for less cars and more public transit use, more people choosing to walk and ride bicycles.""